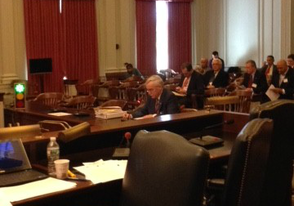 ROXBURY,  NJ – The state pulled a bait-and-switch when it comes to encouraging studies about consolidation of municipal services, says Craig Heard, the chairman of Roxbury-Mount Arlington Consolidation Study.

The Succasunna resident went to Trenton last week and testified before state Senate and Assembly budget committees, urging them to comply with provisions of the law designed to help commissions like the Roxbury-Mt. Arlington group do their work.

Heard also urged the state Assemblymen and Senators to follow another provision that requires the state to help the commissions pay for an outside consultant to review their preliminary findings.

Heard said he’s been told that the DOE and DCA do not have the manpower to work on the studies. He also said he's learned the state spent the money it had earmarked to fund the commission’s consultant.

The Roxbury-Mt. Arlington commission will need that money – probably about $40,000 - in nine or ten months, said Heard, noting the funds, and the DCA and DOE studies, are guaranteed under state law.

If the commission subsequently decides a merger is warranted, the question would be placed on a ballot for the voters of each municipality to approve or reject.

“This grassroots effort to do the study, started in 2012, was approved by receiving the necessary votes from Roxbury and Mount Arlington residents,” Heard told the legislators, according to a statement. “It’s a delicate process but any time you can lower property taxes and streamline a town’s fiscal management then it is well worth the effort.”

Heard, who is running for Congress in the GOP primary, testified before the Assembly Budget Committee and the Senate Budget & Appropriations Committee.

He along with members of taxpayer groups in both Roxbury Mount Arlington, spearheaded the creation of the Consolidation Study Commission four years ago. “I have always been a strong advocate and fighter for accountability and efficiency in government,” Heard said. “It’s something we desperately need at all levels of government.”

Heard told the legislators that the original Local Option Municipal Consolidation Law signed by former Gov. Jon Corzine was later amended by Gov. Chris Christie to include the grassroots citizen initiative used by the Mount Arlington-Roxbury group. But Christie, said Heard, “has provided no funding since being in office.”

He said the purpose of the  law “was to encourage local townships to consider a merger study in total or for shared services to reduce property taxes, as New Jersey has the highest property taxes in the United States.”

Heard noted the Roxbury-Mt. Arlington effort is the first grassroots municipal consolidation initiative in the state.

“We feel we should be granted assistance in funding, as provided by Governor Corzine, and securing the reports guaranteed under the statue,” Heard testified. “After a year of the commission meetings we have consistently been told the funds are not available and the agencies do not have the staffing to complete the detailed study required under the law. If I may respectfully ask; Why was the law sponsored and put into effect if the Legislature cannot provide the funding and the DOE and DCA cannot provide the study reports guaranteed?”

Heard said he suggested that the state consider amending the law to make it a “matching funds” arrangement in which municipalities, for which consolidation is being considered, have to come up with money toward the consultant’s fee before the state will match their funds. While making no commitments, some of the legislators said they liked that idea, said Heard.