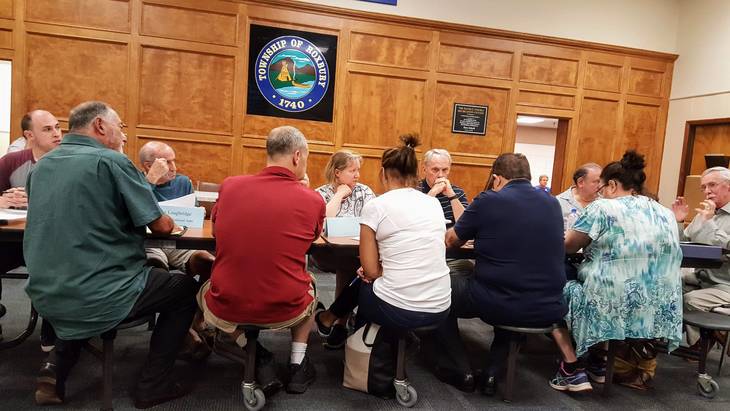 The Roxbury/Mt. Arlington Consolidation Study Commission at work this week

Oters on the commission said the panel will likely be recommending a dissolution of both municipalities and the creation of a new one – possibly with a new name - that will include Mount Arlington, Port Morris, Kenvil, Succasunna, Lower Berkshire Valley, Landing and Ledgewood as communities.

More Time Cunningham, the commission cites “obstacles” that have delayed its work including “the DCA prior management not participating” in its efforts for more than nine months.

It also pointed to “a lack of cooperation in providing documents to the commission, ultimately requiring OPRA (state Open Public Records Act) requests to get the we needed, the deliberate delays of document discovery have extended our period to complete the study,” says the letter. “It should be noted that we have identified over three to four+ million in possible annual Consolidation savings for the combined township that will be detailed in our final study res

A final report cannot be finished until some loose ends are tied, including the ongoing Roxbury property revaluation is finished, said commission Chairman Craig Heard. Once the commission’s recommendation report is finished, the state gets three months to conduct a review before the proposal is brought before voters in both towns.

If voters approve the plan, a state “task force” will “facilitate” the consolidation.