We presented to a positive and engaged audience in Flemington Boro.

There are many steps in the process of a potential consolidation of Flemington, Raritan Township. 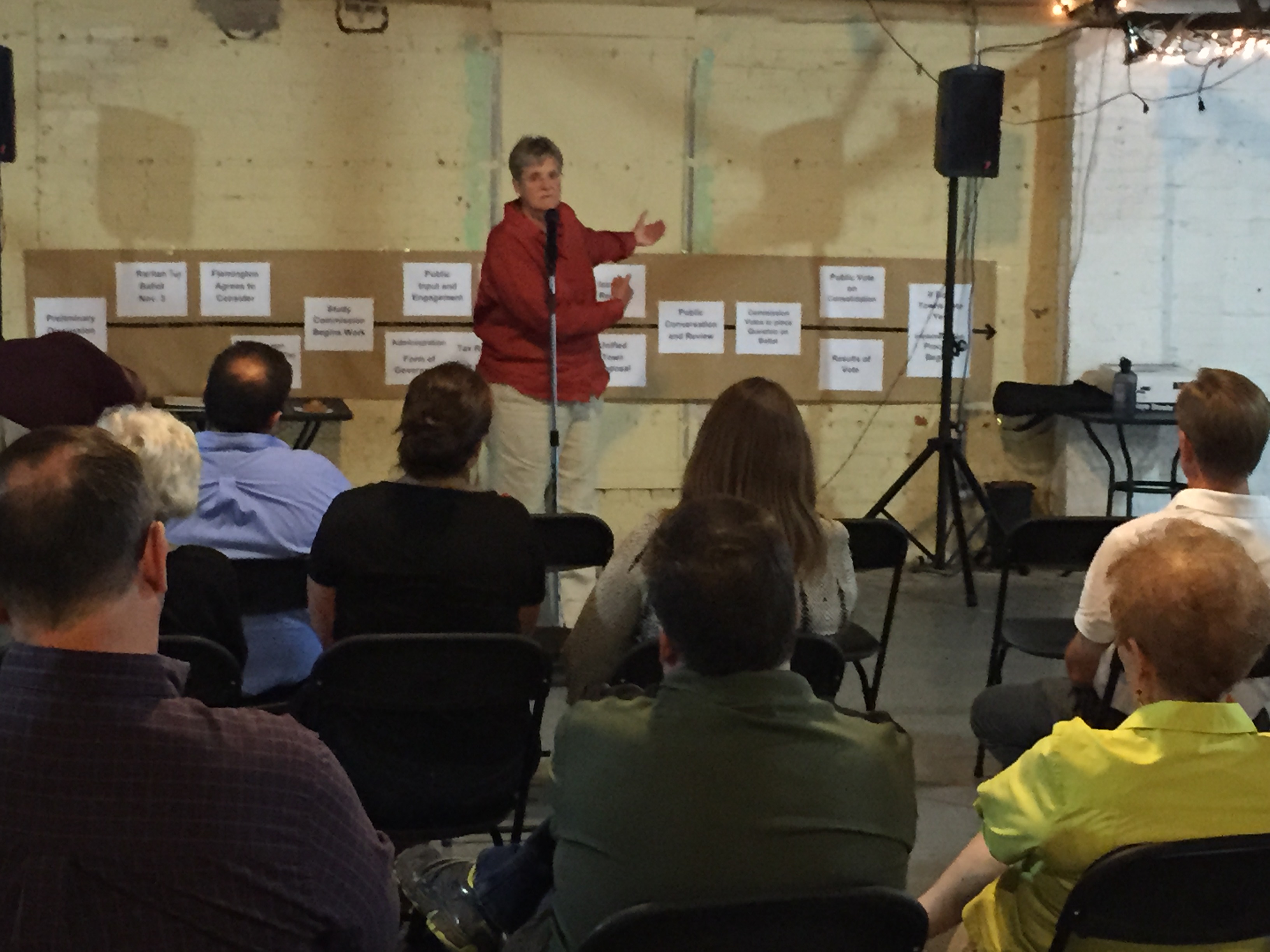 FLEMINGTON Any potential merger of Flemington and Raritan Township can only succeed if there is strong leadership behind the effort.

But the biggest obstacle to municipal consolidation in the past throughout New Jersey has been opposition by elected leaders.

The meeting was prompted by Raritan Township’s decision to place a question on the November ballot asking residents whether they want officials to begin considering consolidation with Flemington.

Gina Genovese, the former mayor of Long Hill who serves as executive director of Courage to Connect, a nonprofit and nonpartisan organization whose mission is to educate the public about consolidation, said residents and elected officials should know the facts about the consolidation before formulating an opinion.

“This is a difficult topic,” she said.

The issue of consolidation between Raritan Township and Flemington is not new, she said, adding that the municipalities’ two school districts have already come together.

Flemington, totally surrounded by Raritan Township, is considered “a doughnut hole” municipality, like Clinton Town which is encircled by Clinton Township.

“The doughnut hole and the doughnut seem like a natural fit,” she said.

In the past few years, Genovese said she had been contacted by about a dozen Flemington residents with questions about consolidation, more than any other town in the state.

The consolidation process is long and complex, with the first step being the two municipalities agreeing to form a commission, with equal members from both jurisdictions, to study consolidation and determine how a unified municipality would work.

“It’s a process of give and take,” she said.

The key to the process is for the commission members to trust each other, Genovese said.

“You have to think as one,” she said.

The commission will consider issues such as the tax impact of consolidation, the responsibility for debt and the new form of government.

The process can end if the commission does not agree on the details of consolidation which eventually has to be approved by voters in both municipalities.

“There’s a lot of time to find out what works and what doesn’t work,” said Raritan Township Mayor Craig O’Brien, adding that he hopes both municipalities agree to create a study commission. “There’s a lot of steps here.”

O’Brien emphasized that the November ballot question asks residents only if they are in favor of the township starting consolidation talks, not whether they support consolidation.

At every stage of the process, Genovese said, the public should be involved.

Chad Goerner, the last mayor of Princeton Township before its consolidation with Princeton Borough, said that while financial issues may be at the center of consolidation, the possible increased quality of services is also important.

For example, when the two Princetons combined, taxpayers saved money by having a single police department. But the level of service rose and responses to emergencies also improved, he said.

Princeton Borough’s municipal trash collection was also extended to township residents, saving them from paying directly to a private contractor.

What facilitated the consolidation, Goerner said, was that the township and borough already shared 13 municipal services.

“You have to look 10 years down the road,” he said. “when you think as one town, a lot of those issues become irrelevant.”

Genovese said there is pending legislation that would give municipalities more leeway in consolidation, including the possibility of merging with a non-contiguous municipality.

If that law passes, Novick joked, could Flemington merge with Maui?

Missed Wednesday’s meeting? It can be viewed at https://www.youtube.com/watch?v=8-91NQGKW9E